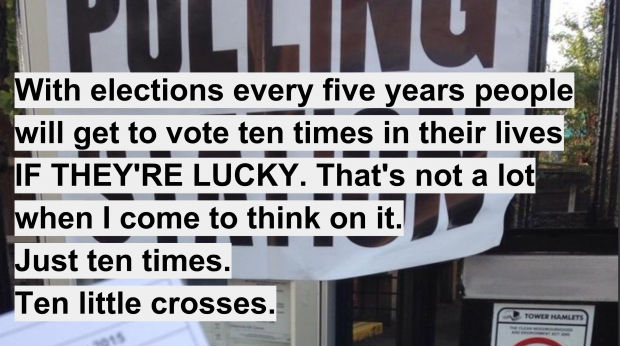 We conducted a small study

With some help from colleagues in the Home Office, we conducted a small study in the days before, during and after the general election. Our goal was to see if there were opportunities to make the voting experience better.

Our data comes from:

We were recruiting during Purdah (the pre-election period) and without a budget, both of which were significant constraints. As a result, the participants in our study skew towards being more engaged in the democratic process than we’d expect to be typical. Still, we think many of the findings are widely applicable, although you’d probably unearth a lot more opportunities and insights if you did the same study with less democratically engaged participants.

Here’s what we found out.

Young people told us that casting their first vote felt like a rite of passage to adulthood. They felt compelled to vote because of the history of sacrifices made to be able to vote, and how hard-won democracy can be.

It is exciting that I could vote - afterwards I felt like an adult and I can get a mortgage next. - Ben

Many people talked about the act of voting as feeling historic, and an important moment for them and their participation in society.

Some people interpreted the paper and stubby pencils as signifying the ‘tradition’ of voting, but many others felt that the experience of voting was quite antiquated.

When leaving the polling station it is hard to believe that we are in 2015... I think next time I will wear a Victorian costume to fit the experience. - EV

I expected it to be exciting but there wasn’t much of an atmosphere - maybe because I went early. - Hatti

The general elections are a moment in time where people are more engaged in their community and in the democratic process than they might normally be. This may offer an opportunity.

People are looking for voting to be more of an experience, but the experience often turns out to be a bit of a non-event.

Many people are surprised at how little time it takes to vote. On the one hand, they feel this should be communicated more widely so that more people know that voting is not time consuming and difficult. On the other hand, they sometimes feel ‘rushed through’ and the importance of the act of voting is lost.

Several people felt confused and intimidated by people wearing rosettes and asking for their polling number. People taking exit polls don’t identify themselves, or what they’re doing, leading some people to mistake them as polling officials. For some people, this made the voting experience more stressful.

[I'm] At the school to vote. People outside asking for my polling card number. Don’t know why. They are wearing political party rosettes. Does this mean my details will be used by the party? I wouldn’t want that. How are you feeling now? Anxious. - DS/BK

Making sure you’re registered to vote is not always simple

Some people indicated that they weren’t sure whether they were successfully registered to vote, or where they were registered. This meant telephone calls to local authorities, which often went unanswered as the election drew closer, and people re-registering just to be sure.

I registered online but I didn’t feel confident that it had been done as I didn’t get a confirmation email, so I called the local council a few days before to confirm. - Elizabeth

Moving house or having two addresses (eg students) was particularly problematic. This meant that some people delayed registering to vote until the last moment because they weren’t sure where they were going to be at election time. Or, sometimes they’d discover that they were enrolled a long distance from their current address.

I registered on the last day. I wasn’t sure where I was going to be [on election day]. I moved placement during my degree and forgot where I had registered. - Scott

People use polling cards to confirm they are registered to vote, to know when and where to vote, and to find the polling station. Polling cards were a point of failure for many people, especially as they seemed to arrive at different times or not at all.

The polling card never arrived, so I’m not sure if I’m registered to vote. - Shad

They were often misplaced because they’d arrived very early, or caused stress because they arrived very late or not at all. Also, the polling station map on the cards seemed to be unreliable.

The map on the polling cards is to the wrong place - people in the queue are furious, they’ve been wandering about lost. One man asks them to put a poster up to direct people. They say they can’t - they only take notes and tell the council for next time. Bit awkward. - DS/RA

Working out who to vote for can be difficult

Most people we spoke to took the decision as to who they would vote for quite seriously. Most of them struggled to find information that was useful to help them make a decision. Many people told us that they used the online tools that anonymised the policies in the manifestos and then told them who to vote for. They found these tools useful.

People weren’t happy to discover new candidates in the polling booth at the moment of voting.

When I got to the sanctum of the booth I was amused to see that there were ten, TEN, candidates. So where were their leaflets? How am I supposed to consider voting for them if the first time I hear about them is in the bleeding voting booth? I mean, FFS! - DS/SW

Young people told us that they talked with each other openly about who they were going to vote for and who they did vote for - they’re aware of this being more of a taboo for their parent's generation, but feel that talking openly was an important way to help them decide who to vote for.

People thought government could do a better job of helping them know when, where and how to vote

Young people in particular thought there was a lot that government could be doing to help more people feel more confident and knowledgeable about the process of voting. A lot of people felt they learned about voting in the polling station when it should have been taught at school.

They don’t teach you that at school. I know how to draw plant cells but not how to vote. - Yiannis

It would be nice to explain the details about voting… to say, this is your first election, when to register, you don’t need to bring ID etc. - Michael

People also thought that the government should be more proactive about messaging people to remind them that the election was coming up and when and where they should plan to vote. Less consumption of TV and newspaper content seemed to mean that it's more possible for young people to not notice there is an election coming up.

What would have been useful is an email a week before the election saying ‘you are registered, remember to vote, this is your polling station'. - Sophie

Voting for two elections at once can be confusing

A number of people were registered to vote in locations where both the general and local elections were held at the same time. For two main reasons, this often caused confusion.

First: the focus on the general election often meant that people were not aware that the local election was being held and had not considered who to vote for.

Went with my husband to vote. Surprised there were council elections as we haven’t heard anything about them. No idea who the candidates are. - DS/MX

Second: there are different methods of voting for each type of election. This caused some confusion and people felt they had to be careful about voting to ensure their vote was valid - some weren’t sure that they had in fact voted successfully.

All done. Always find the mixing of local and national elections tricky. Two crosses on one, definitely one cross on the other. - DS/JS

The ‘localness’ of voting can be frustrating

Voting is very local - you can only vote in one location where you live and you vote for local members who represent that area. Many people found this difficult to understand and frustrating.

The requirement to attend a single location to vote is a point of failure for people who intend to vote but aren’t able to be in the correct place on the day - they often don’t know this sufficiently in advance to arrange for alternative ways of voting or don’t know that other methods are available. To some people, this seemed particularly unnecessary and archaic and is often an unexpected discovery for people who are voting in the UK for the first time.

I thought I could vote anywhere, my friend explained to me I had to vote where I was registered. I missed the deadline to change address. It is irritating that can’t go to any polling station, that it is linked geographically. - Shad

People were often very frustrated that the local representation limited their ability to vote for the party they wished to represent. Most people seemed to think about voting for a party rather than for a particular Member of Parliament - a mental model that’s perpetuated in the way the media talks about the election - then they arrive at the polling booth to discover they can’t vote for their party of choice. This is a frustrating and disenfranchising experience.

I live in Buckinghamshire so I was only offered Conservative, Green and UKIP. It was annoying not to have more choice. Instead of voting on my ballot I just wrote ‘none of the above’ because I was very annoyed at the lack of choice I had. - Joanna

Finally, people who lived in safe seats felt that their votes were much less valuable than those who lived in closely-contested seats.

Part of the reason [I didn’t vote] was that the Tory seat where I live isn’t going to change, so my vote felt a bit pointless anyway. - Liam

Plenty of opportunities for the future

So, it turns out there are lots of opportunities to make the voting experience better, which will in turn result in more people voting in a more informed way.

You can download the deck for more details (PDF). We hope you find it useful.